Learning how to learn: to know, to remember, to understand, to learn how to think, to analyze and evaluate and thus gradually acquire knowledge, learn to create and to do.

Promoting a favorable envrironment to learn how to be in coherence with those values and attitudes that universal culture has consolidated in our civilization.

This is our story

The Luther King School of La Laguna was founded in 1971 as the initiative of Mr. Adolfo Garcia Delgado; with the support of his brothers D. Antonio and D. Alvaro Garcia Delgado and Jesús Olmos Villafruela as well as their respective  wives Mrs. Zoraida Arias, Mrs. Pilar Alvarez, Mrs. Inodelvia Mederos and Mrs. Rosa Luz Alvarez.

With a university and liberal tradition context, and to face the demand for political and socio-cultural change, the school started in the city of La Laguna in the early 70s. This led to a convulsion of the traditional educational model. It was the first authorized centre with mixed students in the classrooms and introduced a new methodology that gave prominence to students to guide their integral development, investing in experimentation and implementation based teaching, in debate and reflection, in physical activity and sport.

After 22 years of consolidation of the LK La Laguna as a successful educational project, in 1993 the Luther King of San Miguel de Abona was opened. During a period of tourist development in the south of Tenerife as an engine of the economy and a new social model of the region, which would mark the future, LK Institution decided to participate in the movement. LK shared its educational experience and previous academic successes. As it happened before with La Laguna, the generous response by the society allowed LK to overcome the initial challenge.

Since September 2015 we opened a third school in a different geographical location, Arafo Luther King, born of the LK joint project in order to transfer our best teaching practices to children in the area of the valley of Güimar and Candelaria.

In these 44 years of educational experience the Luther King centres have trained more than 14,000 students who are now actors and protagonists of a society that moves forward, towards creativity and productivity, respect and sustainability, justice and solidarity.

Our institution takes the name “Luther King” from Martin Luther King (Atlanta 1929 – Memphis 1968), Nobel Peace Prize in 1964, human rights activist who, inspired by the figure of Mahatma Gandhi, led the movement for the equality of civil rights and respect for the segregated, disadvantaged and black people, in the early 60’s of the last century. 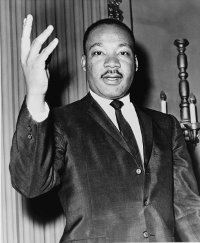 Martin Luther King fought for equal treatment through “the principle of non-violent persuasion”. His figure and his message that fascinated the youths then, and even today meets the essential features of coexistence which define the style of the Luther King educational institution: respect and dialogue; perseverance, will and effort; solidarity and tolerance; and, above all, non-violence.

In his famous speech “I have a dream” Luther King dreams of equality, fraternity and respect for all people, “I say to you today, my friends, that in spite of the difficulties and frustrations of the moment, I still have a dream….”

“… I have a dream that one day this nation will rise up and live out the true meaning of its creed: We hold these truths to be self-evident: that all men are created equal….”

“… I have a dream that my four children will one day live in a nation where they will not be judged by the color of their skin but by the content of their character. …”